The Chaplaincy of Oporto was founded in 1671, when the Rev John Brawlerd, a priest of the Church of England, was employed by the British merchants of Oporto to provide religious services for the British community and to provide for the education for their children.  At that time the religious atmosphere of Portugal did not allow Protestants to have a fixed place of worship or to worship openly, so services were held in the homes of various members of the community.

The second chaplain of Oporto, Rev. Dr Samuel Barton, came out in 1682 to continue providing  spiritual and educational support to the British community. Unfortunately, Dr Barton was discovered by the Portuguese authorities and expelled from the country in 1683, having served for less than a full year. From that time until well into the 18th century, pastoral care was on-going, but with long interregnums between chaplains.

The strong influence of the Roman Catholic Church during that period also meant that Protestants could not be buried in Catholic cemeteries, and as no Protestant cemetery was allowed, burial took place along the banks of the Douro River.

It was not until 1787 that the British Consul John Whitehead was able, with the support of the King of Portugal, to acquire a piece of land outside the city to be used as a burial ground.  The first burial took place about 1790. Today, Consul Whitehead's burial urn stands at the centre of the British cemetery, which he had been so instrumental in securing.

In 1815, shortly after the conclusion of the Peninsular War, the British community was given permission to build a proper place of worship on the land that had been acquired for a burial ground.

The church building was complete by 1818 (but was not formally dedicated and accorded the name of St James until 1843, when the then Bishop of Gibraltar, George Tomlinson, came to Oporto to consecrate the edifice.) Considerable restrictions were imposed on the British community by the Portuguese authorities as to how the church could be constructed. It could not have a spire, cross, or bell. In fact the building was designed to look something like a meeting hall (from the exterior). There is often a misapprehension that the high wall surrounding the property was built to hide the church building from the street, but in fact the wall predates the church, having been erected considerably earlier to surround and protect the entire land acquired by the community, which of course includes the cemetery. 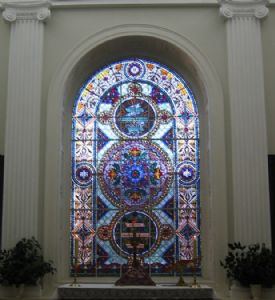 The appearance of the church building  changed when it was extended in 1866/1867. Transepts and a chancel were added, and the nave was lengthened, so that what was once a rather plain, rectangular structure  is now cruciform in shape.

Organised visits can  be arranged on request. This fine old church and the even older cemetery are well worth a visit.  Among the interesting objects and sites to see are the burial urn of Consul Whitehead, the tombstones for Baron James Forrester's family, and the 2nd World War graves of the 11 British and Canadian airmen whose planes were downed in accidents off the Portuguese coast. (Though Baron Forrester is commemorated in the cemetery, his remains do not lie there, as he was drowned in the River Douro and his body never found).

A beautiful war memorial cross stands in a small garden in front of the church and records the names of members of the British community of Oporto who lost their lives in the two great wars of the 20th century. The first part of the annual Remembrance Day service (and this year the short service commemorating the 100th anniversary of the commencement of the 1st World War) takes place  in front of this memorial.

Of course our story doesn't lie entirely in the past. The life of the church goes on, and our chaplain and members of the congregation will be happy to give any visitors a very warm welcome.